Every work of art has a story to tell, and the sculptures of Michelangelo are no exception. After spending two weeks in Florence and Rome, there are a few insights that resonated with me that I thought worth sharing.

In Palazzo Vecchio stands the statue of Michelangelo's David. It's a masterpiece of form, something that has to be seen to be believed. His body is bent, poised to action, with every muscle and vein visible within the marble.

It's also a fake, or a replica in the local parlance. The real David stands within the Accademia Galleria, surrounded by protective plexiglass with a roof to shield it from the ravages of the elements.

The two pieces are alike in every way yet could not be more different. Even before experiencing the legitimate David, you can see the replica is not quite right. The details are not nearly as well executed, the marble of an inferior quality. The real piece is perfect in every regard, from the oversized hands clutching the sling, to the details that form the hair and deep set eyes. It's so astonishingly lifelike, you half expect to see its chest expand in an exhale of breath. 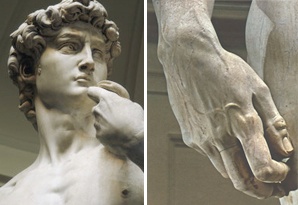 How does your brand stack up to these two examples? Is yours flawlessly executed, from concept to the last detail? Or are you merely competent, good enough to receive a passing nod, but nothing that people are going to remember for the ages?

A final take away from the sculpture are the two interpretations of David's pose. Some art historians hold that he has already slain Goliath and stands surveying his achievement, dispassionately. Others believe that the pose represents David before the melee, in that moment after he has agreed to do battle, but before it has taken place. In short, after he has committed to the act but before completing it.

Which defines you? Surveying your past achievements or looking forward to the next challenge which you can overcome?