Industry news, new projects and other goings on.
Add us to your RSS feed.

You can tell a lot about yourself by how you feel on a Sunday morning.

Something about the seventh day, even to those of us not given to a spiritual bent, lends itself to introspection, which in turn leads one to thinking about one's work life.

Before beginning Substance, I worked a number of creative agency jobs, all of which had their merits and challenges. I collaborated with some great people on some intriguing projects. Nevertheless, Sunday was a day to dread, the hours colored by thoughts of the week to follow. In some ways it was worse than Monday, the anticipation of the work week more daunting than the actual experience of it.

Any time I hear someone utter the loathsome phrase, “Thank God it's Friday”, I think to myself, “You really need to make some changes in your life.”

If you're living for only two days of the week, you're not really living.

My rule of triage for prioritizing business is this. Client work comes first, sales and business development comes second, and self promotion and marketing comes third. Consequently, this means Sundays are often spent at home in front of the laptop, brainstorming ideas.

As I sit hear drinking my coffee and sketching out layouts for this year’s holiday card promotion, it occurs to me how fortunate I am to do this type of work.

Well, that was fast. Just a week after launching their new logo and rebrand, Gap announced it is returning to its old design, after a huge public outcry.

Rather than reiterate what has been written elsewhere, check out the AdAge article on the whole debacle.

Thanks to Libby Meis for sharing the update!

The new logo for the Gap was hardly unveiled before the design blogosphere was abuzz with criticisms of how bad the new logo is. It's only been out a day and people are already thinking this will go the way of the short-lived Tropicana redesign from two years back.

How bad is the logo? Pretty awful. 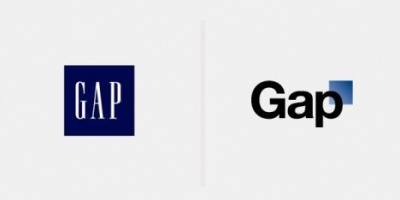 The old logo on the left may have felt a bit stodgy, but it had a presence and felt ownable. Given how much support branding and sub-brands Gap has, one could make the argument that it was one of the least important parts of their brand, just as the Nike swoosh is largely peripheral to their visual identity.
The primary mandate that should have been given in the brand brief is “Don't screw it up”, or in the words of the Hippocratic oath to aspiring physicians, “first do no harm.”
Well, harm has been done, it's just a matter of to what degree. The new logo looks undifferentiated from any number of word marks currently polluting the visual landscape. Even worse, it looks lower market than some of the subordinate Gap brands, such as Old Navy.
It will be interesting to see the public reaction to the new logo. Designers are a notoriously vociferous lot, particularly in the face of bad design work that also happens to be high profile. Will this be one of those instances where the buying public shares their dismay and the company is forced to react?
Share

AIDS Foundation of Chicago has been around for almost as long as HIV/AIDs, dedicated to improving the lives of those affected by the AIDS epidemic. Going into their 25th year, AFC needed to launch a campaign to promote greater awareness, targeting potential donors and lapsed donors.

The challenge for this campaign was to balance creating awareness of AIDS Foundation of Chicago with establishing a sense of urgency about HIV/AIDS in Illinois. There is a level of complacency in fighting HIV/AIDS, fueled by the misperception that it is no longer a crisis or that it is simply too vast a problem to overcome. The campaign mitigates these challenges by establishing a personal connection with the target audience and putting the focus on Chicago, so it becomes a local issue.

We came up with the theme “Change the Story” to show how joining AFC in their fight against AIDS can affect measurable and powerful outcomes. The art direction leads readers to expect a sports or news story, but a statistic about HIV/AIDS provides a powerful and memorable twist to get them engaged. The campaign will begin to appear in October, culminating in a wider rollout through World AIDS Day, December 1.

Special thanks to Chris Matthews, Johnathon Briggs and everyone at AFC who have been extraordinary to work with on this initiative. 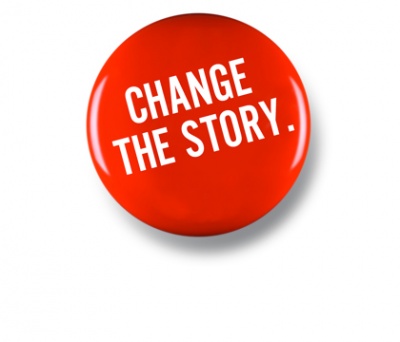 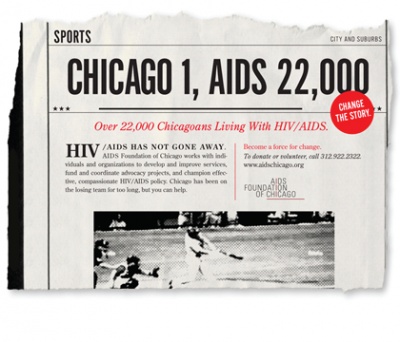 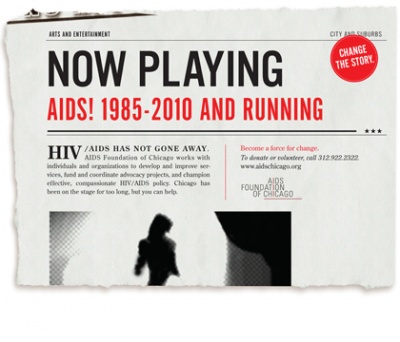 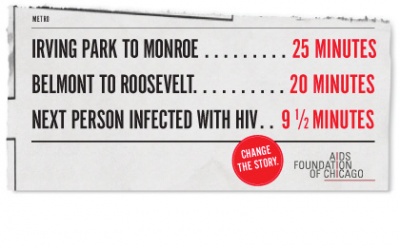 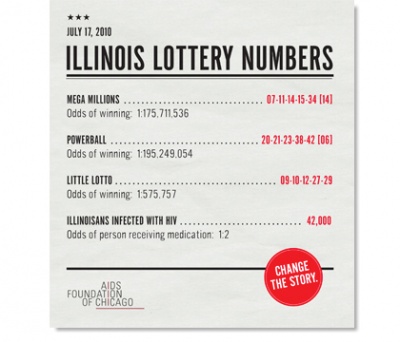 The Illinois Humanities Council promotes involvement in and appreciate for the humanities in Illinois, through event programming throughout the year. Substance will be partnering with them on their winter program, The UnCommon Good.

The premise of the program series is to address our increasingly polarized national dialogue. Blue states, red states, Keith Olbermann shouting at Bill O'Reilly and vice versa. Does a common ground even exist any more or are the moderate voices lost amid the din of the shouting?

The poster we designed to promote this series uses overlaying type to represent the cacophony of voices. The four questions are the title of each program, and the net effect suggests redistricting or dividing of the principles being discussed.

Look for the program to begin this January, which weirdly does not seem that far away.

Chicago Mayor Richard M. Daley signaled the end of an era this week when he announced that he would not seek re-election for another term.

While the mayor has made many mistakes and been guilty of more than a few strong-arm plays, it's hard not to admire his many achievements. He has reshaped his city more than any other mayor in America, making it greener, more progressive, and arguably more fun. Evidence of this abounds, from Millennium Park, the lakefront, the museum campus, and our numerous median strips.

All of this is even more remarkable when you consider what type of candidate he was from the outset. Ill-spoken, unglamorous, with patriarchal baggage from the late Boss Daley Sr., he was in short, awful. But in true Chicago fashion, he kept plugging away at it, unglamorously, diligently, until he became one of our most iconic figures.

We can (and will) debate his occasional dictatorial lapses, but my sense is that in the not too distant future, we will come to look back at this time as Chicago's glory days. Much of his success can be attributed to a single, overriding quality that colored every facet of his term as mayor.

I'm hard-pressed to think of another quality—not talent, hard work, nor intelligence—that serves a leader so well. The best designers I know are passionate to a fault about their work. The best clients are without fail the ones who love what they do and the organization for whom they do it.

What are you passionate about? What keeps you in love with your company? How do you think you will be remembered when you have moved on to other opportunities?

A good way to keep yourself mindful of the importance of your work is to always bear in mind the legacy you will leave behind.

The Chicago Printmaker's Collaborative is gearing up for their end of summer student show, with an open house beginning Saturday, September 4 from 3:00-5:00 pm. There will be tons of great, affordable artwork on sale, including screen prints, etching and intaglio prints. They are also a delightful group of people, so much so that you may decide to take a class in their fall program.

I'm also pleased to note that one of my typographic posters will be featured in the show (see below). If you are traveling through Lincoln Square on what is unofficially the last weekend of summer, stop by and say hello. CPC is at 4642 North Western Avenue. 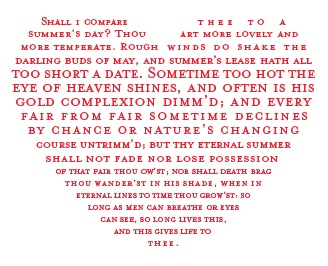 It was recently announced that the National Jazz Museum acquired a set of nearly 1,000 discs made during the 1930s and 40s, the height of the Swing Era. The discs, collectively known as the Savory Collection, due to their being recorded by audio engineer William Savory, are something of a Holy Grail in jazz circles.

Artists represented include Billie Holiday, Count Basie, and Louis Armstrong, as well as some esoteric pieces, such as James Joyce reading segments of his work. The recordings, made on shellac 78 rpm discs, are causing some to re-evaluate musicians who were under-represented in their time, due to lack of available recordings.

What is amazing about this story is the restoration process, taking a 70 year old record and converting it to digital media for the 21st century. What is even more striking is the durability and resiliency of the shellac disc. The fact that the recordings are even salvageable at all is something of a marvel to me. CDs, for all their promise of being a permanent media, last about 15-25 years. The first generation of CDs purchased in the 80s are already beginning to skip and deteriorate. MP3s, as any librarian or archivist will tell you, are only as durable as the device which holds them.

What are the odds that the iPod, external hard drive or computer that you own now will be accessible 70 years from now? And what does that mean for the longevity of your information?

It's easy to drive oneself mad thinking about the ephemeral nature of what we create, and how it will ultimately be lost to the vestiges of time.

It's far better to focus on creating something worth preserving in the first place. And doing it while listening to some old Lester Young recordings isn't a bad place to start.

Are you a not-for-profit trying to connect with a larger audience for an upcoming event? Or a consultant working with similar organizations to do the same? Regardless, you may want to read our recent White Paper on Event Branding. It documents our recent campaign for the AIDS Run & Walk Chicago, and provides do's and don'ts, using similar campaigns as points of reference.

You know the drill. A hundred jokes begin that way. “Guy walks into a bar…”

How many of those jokes end with the guy moving into the bar and setting up his own business?

That's exactly what happened in Sacramento, California last week. A homeless man broke into a defunct bar and reopened it, beginning by selling a six pack of beer he bought from a local liquor store. Like a true entrepreneur, he went back to the store, reinvested the profits into more beer and set up shop. Days later, he was serving over thirty customers and by all accounts, set up a pretty good, albeit illegal, business for himself.

The bar was so successful it received a write up in the local paper, prompting the sheriff's office to inquire if the establishment obtained a liquor license. Upon investigation, they discovered a considerable amount of cash and alcohol. Police arrested the homeless man, one Travis Kevie, charging him with burglary and selling liquor without a license.

Business consultants constantly tout the virtues of thinking out of the box when times are tough, and here is a guy who did just that. Instead of panhandling he came up with an audacious plan, implemented it, and made a successful go of it (for a limited time).

I'm not about to condone breaking and entering, or flouting the law, but there's a lesson to be learned here. In this tough economic times, we keep talking about how we need to approach things differently and come up with new paradigms for business.

Travis Kevie did exactly that. He saw opportunity and took advantage, setting up the adult version of a childhood lemonade stand.

What rules (rules, not laws) could you break that would expand your market? If failing did not matter to you, could you be bold enough to undertake something truly transformational?